If you're hungry now, I strongly suggest you to grab a bite first before scrolling down!!! You've been warned ok hahaha I have some of the most yummilicious mooncakes in Kuala Lumpur recently. Just check out the box!!! 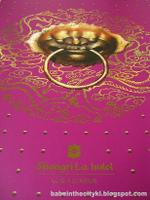 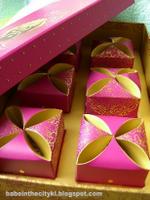 I would like to share with you some mooncakes from Shangri-la Hotel, Kuala Lumpur (also known as Shang locally). Their mooncakes are painstakingly made fresh daily by their Shang Palace's pastry chef. To tell you the truth this sua koo (country bumpkins to that effect) have never eaten Shang's mooncake before other than sampling some tiny morsels a couple of years ago during their promotion.

Hubby tried their samples over at their promo stall in Mid Valley Megamall Mid-Autumn Festival. When I asked him how did they fare. He said this "It's like the lotus paste I used to taste long long ago (before commercialisation). You MUST try the lotus paste!!!"

Hohoho... which got me picking up the tiny morsels of lotus paste, white lotus paste and red bean paste. They were indeed very very DIFFERENT! Next we checked out all those lovely looking snow skin (ping pei in Cantonese) mooncakes in their fridge display but those were not available for sampling, duh!

Anyhow, hubby decided to indulge ourselves this year by purchasing one box of mini mooncakes. You can picked any combination of 6 mini mooncakes ranging from the traditional lotus paste (with or without salted egg yolk), white lotus paste (with or without salted egg yolk) and red bean paste to the 4 types of snow skin flavour (custard with birdnest, green tea lotus paste, coffee lotus paste and durian paste). I can't remember the price for each of them but the most expensive was the mini custard with birdnest which retailed around the region of RM22 for one tiny mooncake!!! Hubby picked lotus paste with yolk, pure white lotus paste and 4 of those snow skin mooncakes. I think the combination costed about RM70++, OUCH!!

They also have the normal sized mooncakes that came in mostly traditional flavours but when I took a peep into the box, goodness, it's smaller than the conventional ones we get normally from the famous bakeries. I think they used the medium sized mold! So expensive but yet so delicious... sighhh and not forgetting we're also paying for the exquisitely elegant packaging!

This is how the traditional baked and snow skin mooncakes... 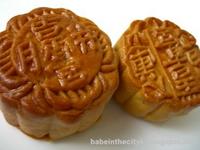 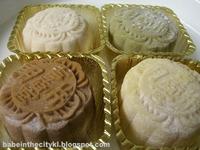 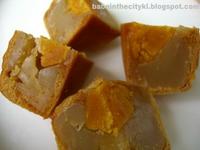 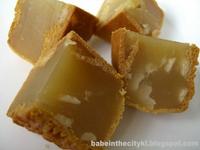 Heh if you click for a larger image of the lotus paste with yolk, you'll noticed some errmm empty holes here and there which I told hubby that he got cheated hahaha. Well being a salesman, he quickly twist it around and sold to me that "Ohhh it's just showed that they're hand made and not machine made. Machine made everything is perfect one." Darn, once a salesman always a salesman! Like I've said earlier, these two lotus pastes tasted damn original and pure.

Ohhh as to what's the difference between lotus paste and white lotus paste... the white one is fairer and more refine which is cooked with better grade lotus seeds where the membrane removal process is tedious plus required a few days of labour, less sugar and less oil as compared with the normal lotus paste. I would opt for the white lotus paste anytimes as it's less jelak (not sure of the English equivalent, less stuffed??). 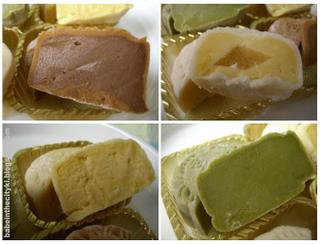 After slicing them all, I put down the tray and let my boiboi choose which one he would like to eat. He loves mooncakes by the way, thanks to my mom who feed him as snacks of late. You know which one he picked??? My smart boiboi picked the most expensive of the lot hahaha yes the one with birdnest! Since he was the first to have a bite, we asked him how was it. His reply was "It's very nice." and then he put his thumb up "Good". So both of us quickly took a bite... whoa it was so nice... the custard is so smooth and creamy yumyum but I got no commment on birdnest since they're tasteless anyway.

Boiboi requested for his second piece but we made him choose other flavour. Hubby took the durian paste one and pass to him. He took one whiff "DON"T WANT!!!" ahahahaha this boi have a love hate relationship with durian. Some times when he's on an adventurous mood, he don't mind have a few bites of durian but other times he would attempt to eat but the next thing we knew he got this shiver ran down his spine expression hahaha very funny and cute. This durian paste is extremely fantabulous but coming from durian lovers, so you go figure. *evil grin*

We ushered boiboi to try the green tea but he shook his head. Maybe because of it's weird colour? We don't know. So we asked him to try coffee which he refused initially but after we told him it's very nice one and he took a bite. You know what??? He asked for more. That was how fragrant and tasty the coffee lotus paste tasted.

As for the green tea lotus paste, it's really nothing to shout about. I find the Purple Cane Restaurant and Tea House version way better. Review coming right up.

My verdict... GO GET YOUR OWN SHANG'S MOONCAKES... for I'm really over the moon in SHANGRILA!!!

Whilst researching for my Mid-Autumn Festival articles, I came across some news clipping or articles, here are some of them:

Kum Lun Tai, one of the famous low chee hoe (Cantonese for oldest brand) for mooncakes in Kuala Lumpur but have since diversified and manufactured their mooncakes using machines.

Tong Kee Brothers Confectionery is usually famous for it's egg tarts but they make mooncakes too.

Museum Chinese Restaurant of Legend Hotel, one of the popular hotel around.

Head on about Mid-Autumn Festival.

For all the various mooncake recipes, key in "mooncake" as the keyword here to obtain a list of traditional and innovative ones.

More articles and recipes over at about.com too.

Oh yeah, wishing everyone a very happy and joyous Mid-Autumn Festival (in case I didn't have time to post my other Mid-Autmn Festival posts on time)!!!!
Posted by Babe_KL at 11:31 am