If you're a foodie, you would have been catching up the latest season of MasterChef Australia on Lifetime (Astro channel 709) but for those who don't but is still a fan of MasterChef series, remember to tune in every weeknights at 7.00pm and 11.00pm.

In conjunction with this, A+E Networks who runs Lifetime, brought in one of the beloved judge of MasterChef Australia, George Calombaris, for a promotional tour of Kuala Lumpur, Singapore and Jakarta.

I was checking my Instagram (look for babe_kl) on late Saturday night and saw George posted that he's on his way to Kuala Lumpur. Wow so late and I know he has a meet the fans session at MidValley Megamall at 2.00pm on Sunday. Anyway, I knew via Lifetime's website that they have asked fans to vote for dishes to be presented to George to try during this session. The final top 3 dishes were Nasi Kerabu, Assam Laksa and Orh Jien (Penang Style Oyster Omelette). 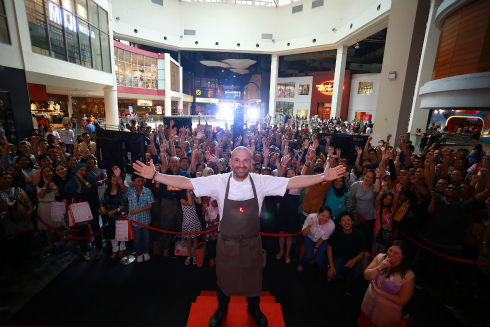 You can see hordes of people at Midvalley and he did took a video on Instagram (@gcalombaris). He told us Assam Laksa tasted FUNKY, something I would have describe the dish myself :p 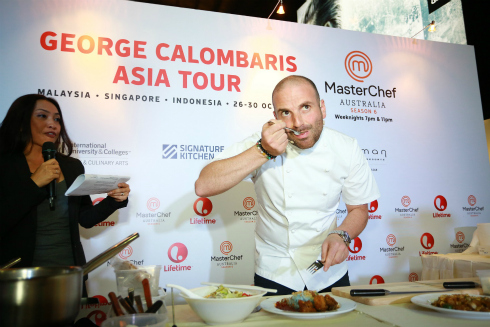 We have the privilege to be invited to a dinner cooked by George and his team held at Pullman Hotel, Bangsar. When BoiBoi found out that we're going for this dinner and he had to go back to the gramps for the night, he literally "beg" his daddy to let him go in his place. Many pleases went and the daddy was happy to allow him to and there went our "date night" haha.

During the introduction, we were told by Charles Less, ‎Head of Advertisng Sales at A+E Networks Asia that viewership of MasterChef Australia S6 overtook MasterChef USA S5 by 15%. That's quite an amazing fete. 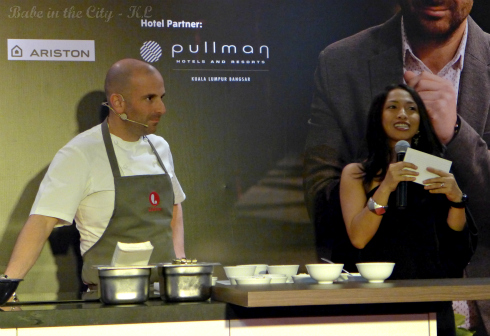 George was introduced later on amidst thunderous applauds. After some banters, he took out a list from his pocket and read out what food he has tasted so far in KL. Lots of yummy dishes listed such as nasi lemak, Hokkien mee, hor fun, rojak etc but not long enough to taste many others delicious fare we have in Malaysia. When asked which is his favourite so far and he was quick to name (fruit) rojak. He loves the flavour and various textures in the fruit rojak.

We were served the first course of Chicken Parfait with Bitter Chocolate Baklava, Coffee, Cumquat, Pickled Onion & Pumpkin Seeds which is essentially creamy chicken liver pâté which went with crunchy flat baklava. The pâté portion was quite substantially, enough to be spread on dinner roll. Sounds like a train of ingredients on the plate but each of them complimented each other perfectly. 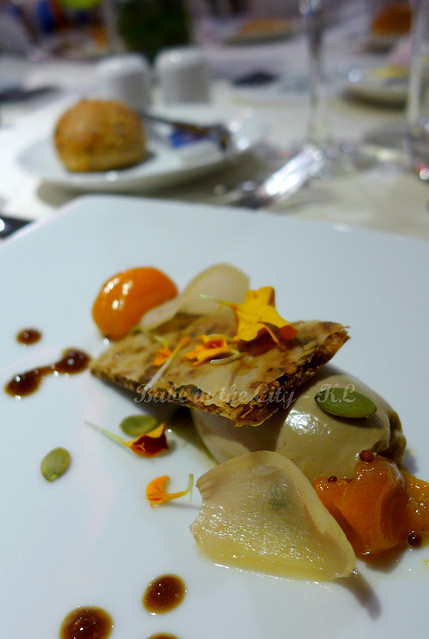 Next on he took to the stage to demonstrate the next course of Green Greek Salad with Stir Fry Abalone with a female student (sorry didn't catch her name) Inti International University & Colleges who is one of the sponsor. Once he's done, he turned the table around and asked her to be the judge of his dish. She gave him full marks for his effort, of course. 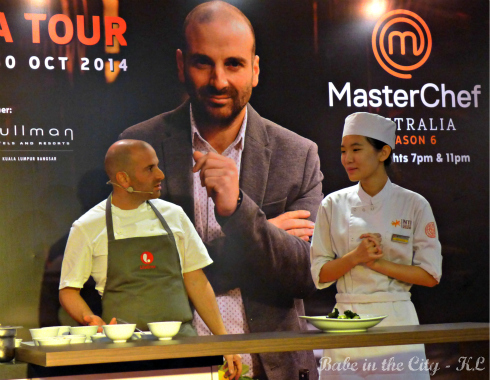 The whole dish basically looked green which well got BoiBoi a bit skeptical to try. He poked around and got round to taste the crispy kale and green feta puree. Nothing beat fresh stir fried abalone slices that went along with cheese puree, slivers of asparagus & peas and crispy kale. 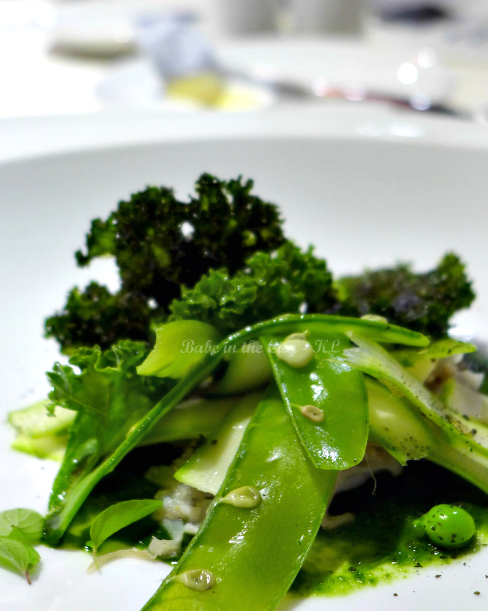 Main course is on next. We get to see George preparing the chicken rolls on live feed. This time round he has a male student to assist him. Once he plated up his Poached Chicken with Miso Hummus & Green Mango Salad, George got him to taste. Full marks for this dish too! 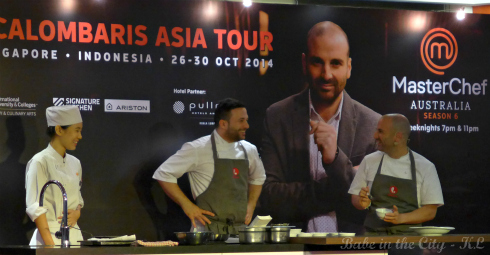 It did sounded strange to marry a Japanese ingredient with a Middle Eastern dish. Luckily the miso was rather mild in the hummus. The chicken meat is marinaded first before rolled into a cylinder. It was then secured in cling wrap to be poached. Next the chicken is rolled with black and white sesame seeds. Loved how the sesame seeds incorporated into this for the texture. There are even "worms" on the plate :D 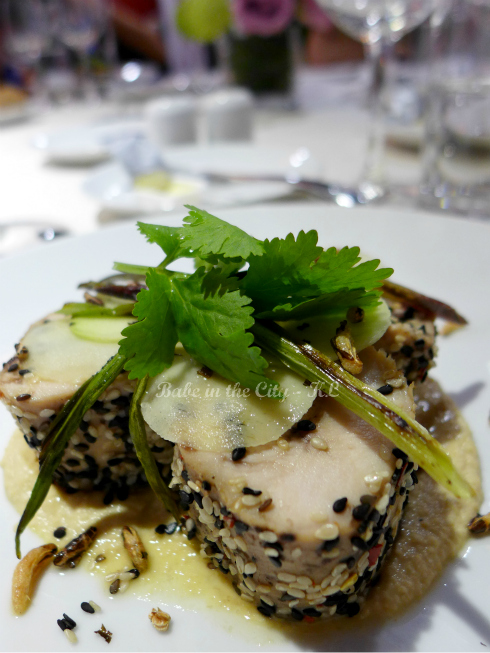 Earlier in the evening, we were told to ask George questions via Twitter. Before I forget the tag #askgeorge, I quickly posted my question and get on with dinner. Was totally surprised that my question got picked. I get to ask George personally the question... what inspire him to come out with tonight's dishes. Not only that, BoiBoi and I got on to the stage as well for photos opportunity :D

George replied that one would usually need to come earlier to recce the ingredients available in the country, check out the freshest ingredients and spices locally and try to use them to incorporate the different elements of the dishes. For that effort, BoiBoi was presented an autographed copy of George's cook book. BoiBoi is very proud of this and hopefully he will get round to cook some of the dishes in the book. 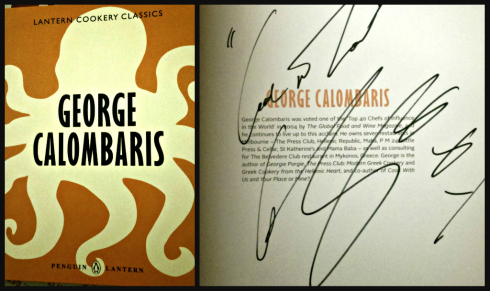 Lastly, dessert simply named as Chocolate Cake was served. Such simple name but you can see there are a lot of going-ons on the plate! There's the chocolate cake, chocolatey sauce, dark chocolate soil, chocolate ice cream, some yellow crumbs which I thought it was crushed honeycomb and hmmm foam which I think it's fennel but none of us could guess what it was. Everyone around the table went yuummmm mmmmmm on this one. 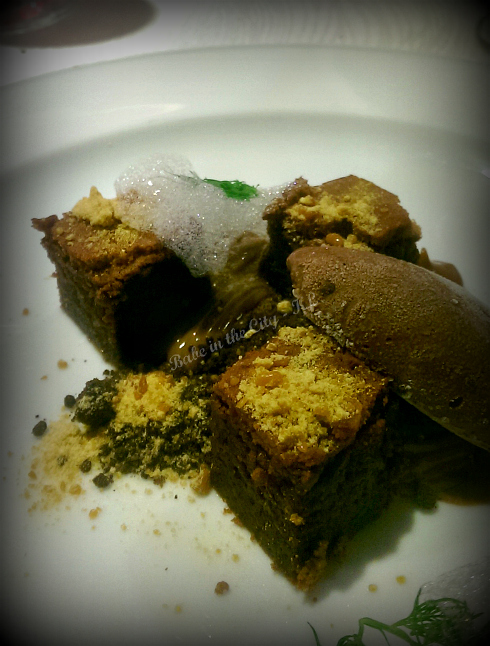 BoiBoi and I would like to thank Rubini, Janet, Hui Jun, the good people of A+E Networks Asia for the most memorable invite ever for both of us. Thank you George too for being so accommodating!