Warning: Loads of rantings and localised expression in various languages including flowery ones in this post. All were written based on my self opinion and experience. Please don't flame me!

I tell you hor the Secret Recipe's staffs super blur one leh!!!! Never pay attention or maybe they don't understand me or they never listen... all I asked was "Can you recommend me a cake that is non-chocolate and without cheese?" and I repeated a few times in Malay - their mother tongue! Gee they still recommended me cakes with choclate as part of their name duhhhhh!!! Feel so geram (angry in Malay)!!! When I asked for Almond Coffee, one staff checked and came back said don't have. Hello??? In the first place don't tell people they have ALL the cakes in their catalogue arrrghhhhhh, I really feel like walking out already but I gotta be patient! **tahan**

Next they recommended White Chocolate Macadamia or Tiramisu!!!! Could you believe it??? My face was already very black and long then and I told them that don't tiramisu contained cheese as well?? The staff have to asked 2 colleagues to verify that. Aduhai... I was really pulling my hairs with the kind of knowledge they have on the products on sale. WTF happened??? Staff don't undergo training? They just couldn't be bothered to get to know the products on sale in their shop??? I really feel like lashing out at the manager who looked fresh out of high school... really cheesed (pun intended) off ok!

Anyway, I have no idea why so many people raved about their cheesecake when in my opinion they're just run of the mill cheesecakes. Maybe the opening of the many branches and producing them on bulk really have taken its toll! Hey, Secret Recipe's owners, please wake up.

Sighhh since not much choice left, I opted for the White Chocolate Macadamia which is vanilla sponge filled with vanilla cream and some chopped macadamia coated with white chocolate. When we sliced the cake after leaving out from the fridge for about 15 minutes (remember boiboi sang the Birthday song many times over plus the photo taking sessions hehehe), the cake literally melted. It was so soft and the white chocolate coating melting. 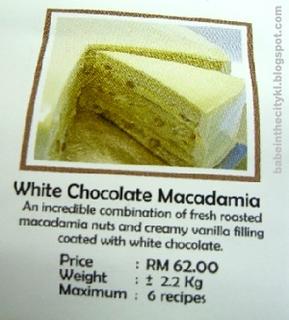 Actually the cake did taste good but we all felt that there were simply too much vanilla cream in between the thin sponge cake. So little cake, so much cream coupled with white chocolate... can you imagine how JELAK (bloated feeling in Malay) it felt after one thin slice? Maybe we ought to put it in the freezer for 15-20 minutes before bringing it out, it would be a better texture than one blob of creamy gooey mess, I mean after slicing. Maybe I should take the picture of the sliced cake cos the one here in their web looked so neat hehehe...

Maybe I should have sticked to the fail-proof Chocolate Banana... sighhh...
Posted by Babe_KL at 2:22 pm