Hokkien fried noodles are thick noodles cooked in black and thick soya sauce. The thick noodles have alkaline as part of it's ingredient and it is also known as yellow noodles here. Usually I cook this using the non-alkaline noodles (pan meen noodles that one can easily find in the wet market or supermarket shelves). I've used udon too which tasted utmost delicious.

Here's my own version of Hokkien fried noodles. 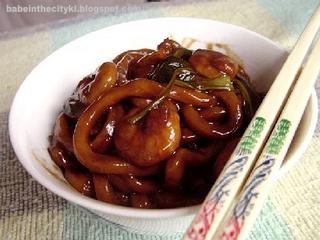 If you're using non-alkaline noodle (aka pan meen), cook it first in a pot of boiling water with some salt and oil added to it to prevent the noodles from sticking. Cook till al-dente just like pasta. If you're using the alkaline noodle, just blanch with hot water to rid off the oil and some alkaline on them.

Traditionally, chefs use deep fried lard but for health reason, I omitted them but purist who can't live without their chu yau char (deep fried lard in Cantonese), please feel free to use them.

Fry some sliced meat (I used chicken but traditionally it's pork) and shelled prawns in hot oil till 3/4 cook. Stir in loads of chopped garlic. Add in some oyster sauce and thick soya sauce. Pour in water about enough to cover the noodles. Once boiled, taste and adjust the seasoning. Since I've used oyster sauce, I normally don't need to add in any salt. How much thick soya sauce depends on how black you want your noodles to be.

Add in the noodles and cover up. You may add in more water if you feel it's not enough but not too much though. You don't want a soupy noodle. Braised till noodles are soft or whatever texture you fancy. Stir in some choy sum and let it simmer for a short while. Dish up and serve hot.

My other pan meen based noodle can be found here.

BTW, noticed I've added in some adverts hehe... need to generate some income to buy and host my own domain one day. Still need loads of tweekings though but later. So bear with it for a while. I've also started to ping my entries in Project Petaling Street, so you guys don't need to keep on coming back to check when my blog is being updated.
Posted by Babe_KL at 3:33 pm